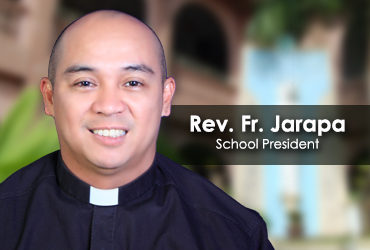 In his inauguration speech during the Mass of the Holy Spirit, he pointed out that the day shall be called a memorial feast in which all the generations shall celebrate with pilgrimage to the Lord as a perpetual institution.

“I was reluctant to lead Maryhill College for several reasons. First, I never had a chance to be a prime leader of any institution before. For 19 years, I used to teach students in the seminary approximately 3,700 people under my care, it would be a very big adjustment,” he claimed.

Furthermore, the School President admitted that he cannot put credential in school management and only have guts and open mind to learn everything in the process.

“There were personal reasons why I hesitated to accept the position of the school director but by the vow of obedience and by the trust of the bishop on me, I cannot but say yes to this appointment and to the challenge,” he added.

According to him, his first year in Maryhill College was his Passover experience, taking the lead over the MC family and providing food and share whatever is served in the table.

“However, there were moments of plenty but also moments of scarcity,” he said.

Also, he stated that what is essential is that Maryhill College are all together despite the differences among the members. The family remained intact despite the imperfections.

More so, the former Vice President Msgr. Leandro Castro hoped and prayed that the newly-elected President will take this responsibility with true sacrifice, obedience, and service to Christ and the institution.