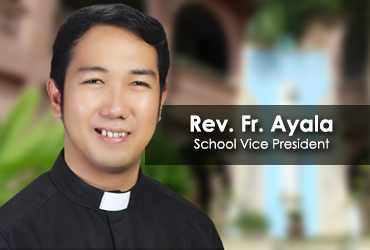 Maryhill College embraced Rev. Fr. Felix Ayala as the new Vice President during the Mass of the Holy Spirit, July 19.

Rev. Fr. Felix Ayala has been in priesthood for the past 2 years as he was ordained last January 23, 2017. Then, was assigned in the Parochial of St. Ferdinand Cathedral.

His effectivity as the Vice-President began on May 31, 2019. Before engaging into such position, he felt conflicted due to the weight of the work, but saw it a plan of God.

On the other hand, it is still a big challenge for him to manage not just the academic values of the school but also its administration.

“As the Vice-President, I wanted to see the students strive when it comes to academic fulfillment, to sustain excellence and gain faith formation as Marians,” Fr. Ayala claimed.

Also, he said that his main goal is to make Maryhill College a household thing for a specific brand known for having a strong devotion.

With the schools tagline #choosehappiness, Fr. Ayala finds a way to connect and build a happy workplace and to see Maryhill College not just a school but a home for all.

The English committee has been now divided into two categories, the lower BED handled by Ms. Julie Valdories and Mrs. De Ramos for Higher BED.